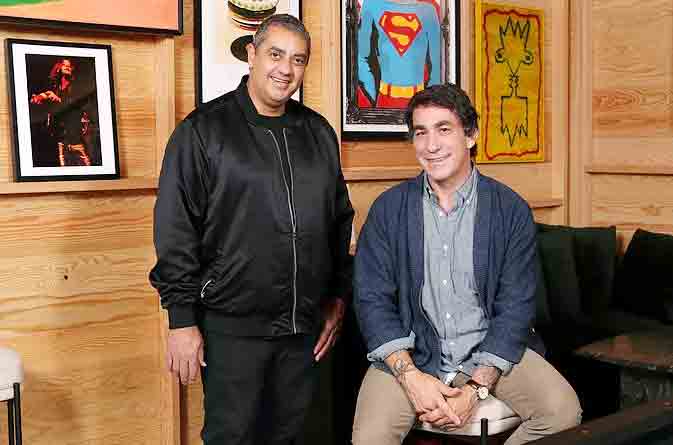 Michael Mina Shows Menu More than two years after announcing plans for a downtown shoreline restaurant from Michelin-starred chef Michael Mina, his Mina Group has confirmed the celebrity cuisinier is teaming up with Hollywood nightclub mogul and reality-TV star Brent Bolthouse for The Bungalow Kitchen Tiburon, part of a collaboration they began together in Southern California.

The restaurant is slated to open in spring at the former 5 Main St. home of Guaymas Mexican restaurant and will feature California cuisine with an emphasis on local ingredients, classic cocktails, an expansive wine list and a clubhouse atmosphere that is both “chic” and “bohemian,” according to Mina Group spokeswoman Nicole Lax.

Lax said menu highlights will include:

• House-made pizzas such as the carbonara pizza, a white pie with crispy guanciale, or pork cheek, Yukon gold potatoes, pecorino romano and a poached egg.

Lax described the interior as having a “relaxed residential feel with a contemporary California twist, showcasing an eclectic selection of art and artisanal touches that reflect the bohemian vibe of artists from a bygone era.”

It has been designed by architect and interior designer Martin Brudnizki, whose portfolio includes Annabel’s, a private club in London, and The Beekman hotel in New York.

The first-floor bar and dining area of the two-story, 12,000-square-foot restaurant will be done in a cool-toned palette of blues and pinks, according to renderings provided to The Ark and project descriptions. A large window will open onto a dining terrace with views out to San Francisco Bay and the city skyline. Upstairs, a billiard room will open onto a large pergola-roofed terrace. The furniture will be rattan with patterned fabrics and the finishes in brass and marble. Greenery will be planted throughout and artwork evoking a bohemian sensibility will hang on the walls.

Egyptian-born Mina, who lives in Nicasio, got his big break when working with Executive Chef George Morrone at the Bel Air Hotel in Los Angeles, then followed Morrone to San Francisco to work at Aqua. He took over there as executive chef when Morrone retired, earning numerous awards and global acclaim.

He partnered with tennis star Andre Agassi in 2002 to form The Mina Group, which owns 40 restaurants in the U.S., including eight in San Francisco, such as Mina Family Kitchen, International Smoke, Trailblazer Tavern and namesake Michael Mina, which in 2006 earned two Michelin stars.

Bolthouse is an entrepreneur, club promoter and DJ known among reality-TV addicts for his five-season stint on MTV’s “The Hills.”

His own Bungalow Hospitality Group opened its flagship restaurant and bar The Bungalow in 2012 at The Fairmont Miramar Hotel in Santa Monica and followed with The Bungalow Huntington Beach in 2016.

In November 2018, he announced his partnership with The Mina Group to open The Bungalow Long Beach and The Bungalow La Jolla, with menus created by Mina.

Though Mina had announced his Tiburon restaurant two months earlier in an exclusive to The Ark, neither The Mina Group nor Bolthouse signaled the local eatery was part of their collaboration.

However, when The Mina Group brought its concept to the Tiburon Design Review Board for approval that November, representatives described the restaurant as having a “bohemian” “beatnik poets’ bungalow” vibe, and The Ark soon learned the restaurant carried the working name The Bungalow Kitchen.

The plans for the two new Southern California Bungalow locations stalled when the COVID-19 pandemic struck the U.S. earlier this year, with Bolthouse and Mina scrapping the La Jolla project, at least temporarily, while rebranding the Long Beach restaurant with their new concept as The Bungalow Kitchen Belmont Shore, a Long Beach neighborhood along Pacific Coast Highway. That restaurant is now expected to debut early next year, ahead of Tiburon’s.

Bolthouse called it “the most innovative restaurant project I have ever been a part of.”

“The Bungalow Kitchen Tiburon had been in the works for quite some time, and we’ve long wanted to re-create the striking and luxurious feel of an elegant, exclusive clubhouse on an accessible community level,” he said.

“Both restaurants will highlight my version of California cuisine and emphasize the incredible bounty and purveyors of the regions in which they are in,” Mina said. “Our goal is to bring a warm and comforting place that will feel like an extension of the living room you always wanted.”

Saudi opens virtual G 20 with Telephone for global Actions on...

What is Chronic Kidney Disease and How Might it Affect You?

ABOUT US
Newspaper is your news, entertainment, music fashion website. We provide you with the latest breaking news and videos straight from the entertainment industry.
Contact us: contact@ucadnews.com
FOLLOW US
© Newspaper Site Theme by-ucadnews.com
MORE STORIES

Justin-bieber’s 10 Main Accomplishments at the past Ten Decades