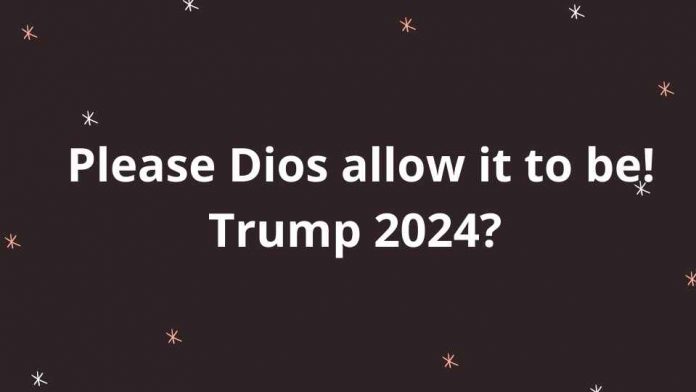 Please Dios allow it to be folks, Joe Biden hasn’t even been inaugurated yet, and already it’s time to pass over the mid terms and start looking at 2024. That’s just the way things are these days, in the era of massive money collection, marketing, and one upsmanship. Life sucks, wear a helmet.

It’s all being brought on by rampant speculation that on January 21, 2021, Trump may do exactly the same thing that he did on January 21, 2017, and announce his candidacy for the next cycle, allowing him to immediately begin collecting campaign kaboodle. This should not be taken as a clear indication that His Lowness would actually try to run again in 2024, since he would set things up in a way that funnels the funds into a PAC with extremely loose restrictions, which would allow him to abscond the funds for almost any purpose, like lining his pockets.

But Trump claiming to run in 2024 has the immediate effect of locking down the field. The standard GOP kitty litter, such as Pence, Cruz, Pompeo, Sasse, and all the other third rate losers, would be loathe to hump in and start a run against Trump’s vaunted base. One scenario is one where Trump dominates the field until the last minute, when Dipshit Donnie Jr jumps in and files, whereupon Trump bails out and lives his monkey spawn an open field. Cruz in particular would be in the hurt locker, since he would have to decide whether to run or defend his Senate seat.

But the general feeling is that if Trump is able to remain unindicted, he will have no choice but to run for another term in 2024, whether against Biden or Harris, if for no other reason than to try to extract revenge for his embarrassing defeat in 2020. And if that happens, then Trump himself will sow the seeds of the GOP’s self destruction.

A week or so ago, I wrote a post game diagnosis of the 2020 campaign. One of the real sticking points in the campaign was that the Democrats took an unexpected spanking in House races. I postulated that white suburban women became upset with Trump almost immediately upon his inauguration. In 2018, they rebelled, dragging their hubbies to the voting booth by the ear lobes, to vote for Democrats down the ticket as a protest to the GOP over Trump. But in 2020, with Trump on the ballot, the chickens came home to roost. White suburban women, and presumably their hubbies, voted GOP down the ballot, but refused to vote for Trump at the top of the ticket.

That hypothesis is now being born out, with statistical proof. MSBC morning anchor Joe Scarborough pointed out earlier this week that Susan Collins was one of the most vulnerable GOP Senators in the cycle, And yet, when push came to shove, the constituents of her state reelected her to another 6 year term with a resounding 9 point landslide result. But when you look at the Maine election results, Trump lost Maine to Biden by an almost identical 9 point margin!

And then pollster Charlie Cook, of The Cook Report chimed in, citing several competitive House races that the Democrats flipped from red to blue in 2018, and all of which flipped back red in 2020. And in every case, the GOP challenger that flipped the state won by a margin nearly identical to the margin by which Trump lost the district.

There can be no doubt. Trump is absolutely toxic to white suburban women, and if they want to have a happy home life, white suburban men too. Democrats paid a price for white women who flipped in 2018, having no expectation that they would so blithely flip back again in 2020. But they had no way of knowing that suburban white women would choose to spank Trump directly, without making the rest of the party pay the price.

When I was 12 or 13, my parents took us to Alaska. One place that we stayed at had a breakfast buffet. I loaded my toasted English muffin with something I thought was blackberry jam, and took it back to the table. My first bite found that I was chewing on salty, icky, fish eggs! Caviar has been on  my shit list ever since that day. Donald Trump is like that, he’s an acquired taste. Either you can find a way to tolerate him, or you can’t. Suburban white women have definitely never quite acquired the taste for Trump, and spending 4 years listening to him spew his bigoted, racist, sexist spew from somewhere other than the White House is not going to increase their appetite for him. But it will continue to fuel the resistance to him.

coronavirus spread inside a government office in Florida — and how one official says...

President-elect Joe Biden plans to nominate To Bring Vilsack Back To USDA, Despite Criticism...

President-elect Joe Biden plans to nominate To Bring Vilsack Back To...