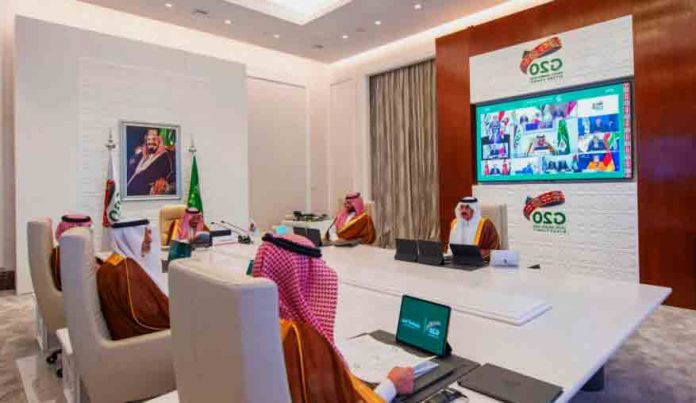 Saudi Arabia’s King Salman urged world leaders to unite to support the global economy as he Saudi opens virtual G 20 on Saturday under the shadow of the pandemic and growing criticism about the Kingdom’s rights record.

The two-day meeting of the world’s wealthiest nations is usually an opportunity for leaders to meet face-to-face but as Covid-19 has swept across the globe Riyadh downscaled the event to online sessions where issues from the climate crisis to gender equality will be discussed.

It marked the first time an Arab country has held the prestigious event.

However, participants have faced mounting pressure from United Nations officials, politicians and civil society to boycott it or use the opportunity to raise rights issues, such as the detention of journalists and rights workers, the murder of Saudi dissident Jamal Khashoggi, as well as the Kingdom’s ongoing war in Yemen

Dozens of Saudi activists and lawmakers from the US and Europe held a parallel G20 “counter-summit” in which they condemned Saudi Arabia’s abuses against human rights activists, women, the free press, and civilians in the Yemen conflict.

Saudi Arabia has repeatedly denied allegations of committing war crimes in Yemen or abuses at home.

“We have a duty to rise to the challenge together during this summit and give a strong message of hope and reassurance to our peoples through adopting policies to mitigate this crisis,” he said via video link from Riyadh.

“The theme of our presidency is realising opportunities of the 21st century for all,”  he continued, adding: “We must also continue to support the global economy and reopen our economies and borders to facilitate the mobility of trade and people. We must provide support to the developing countries in a coordinated manner to maintain the development already achieved over the past decades. “

Discussions are expected to be dominated by responses to the Covid-19 pandemic, including ways to support a global economic recovery and fair distribution of the Covid-19 vaccine.

World Bank president David Malpass on Saturday warned G20 leaders that failing to provide more permanent debt relief to some countries now could lead to increased poverty and a repeat of the disorderly defaults seen in the 1980s.

German chancellor Angela Merkel called for strengthening the World Health Organisation and stressed the pandemic can only be overcome if an affordable vaccine is available to all nations.

A day before the summit, UN secretary general Antonio Guterres said that while $10bn (£7.5bn) has been invested in efforts to develop vaccines, diagnostics and therapeutics, another $28bn (£21bn) is needed for mass manufacturing, procurement and delivery of new Covid-19 vaccines around the world.

Boris Johnson, who attended the summit via video link, said ahead of the summit that he will urge other G20 leaders to take more ambitious action to defeat the pandemic and combat the climate crisis.

He will also use Sunday’s session to call on those leaders yet to make net-zero commitments to make the same pledge. Britain co-hosts the Climate Ambition Summit on 12 December.

“The G20 committed in March to do ‘whatever it takes to overcome the pandemic and protect lives and livelihoods’. As we meet this weekend, we must hold ourselves to account for that promise,” he said before addressing the summit.

In a draft communique released ahead of the event, G20 nations reiterated that point noting that the coronavirus crisis had hit the most vulnerable in society hardest. It said some countries may need debt relief beyond a temporary moratorium on official debt payments now slated to end in June 2021.

Saudi Arabia had hoped hosting the summit would offer it an international platform to promote its reform drives and new ventures into tourism.

But the event has led to a flurry of criticism from human rights groups and politicians who have called on G20 capitals to boycott the event, renewing global attention on Saudi Arabia’s rights record.

Last month, the European parliament passed a wide-ranging resolution calling for the European Union and its member states to downgrade their representation at the virtual summit in order to “avoid legitimising impunity for human rights violations and ongoing illegal and arbitrary detentions in Saudi Arabia”.

Meanwhile, the mayors of New York, Los Angeles, Paris and London all have boycotted G20 events, while dozens of parliamentarians across Britain and the US have urged their governments to withdraw. Jamal Khashoggi’s widow, Hatice Cengiz, and several NGOs called on leaders to boycott the event and UN special rapporteur Agnes Callamard called the participation of countries like the UK  “shameful”, urging the nations to at least use the opportunity to call out Saudi abuses.

The International Rescue Committee and separately the Campaign Against Arms Trade, called on countries like the UK to suspend billions of dollars’s worth of arms sales to Saudi Arabia, over the war in Yemen.

A “counter-summit” organised by leading rights groups, meanwhile, was in full swing at the weekend, focused on “human rights violations in the kingdoms”. Speakers included lawmakers, Ms Cengiz, and the families of imprisoned activists, including Loujain al-Hathloul, who is more than three weeks into a hunger strike in protest at her conditions in jail.

The charges against Ms Hathloul and the other women’s rights activists have yet to be made fully public but she has been interrogated for contacting foreign journalists, diplomats and rights groups.

In a draft, G20 leaders said they would decide next spring whether to extend the freeze, the Debt Service Suspension Initiative, for another six months, and endorsed a common framework for debt restructuring hammered out with the Paris Club of official creditors.

“We are determined to continue to use all available policy tools as long as required to safeguard people’s lives, jobs and incomes, support the global economic recovery and enhance the resilience of the financial system, while safeguarding against downside risks,” the statement said.

‘Exterminate All the Brutes’ offers a searing second take on US...