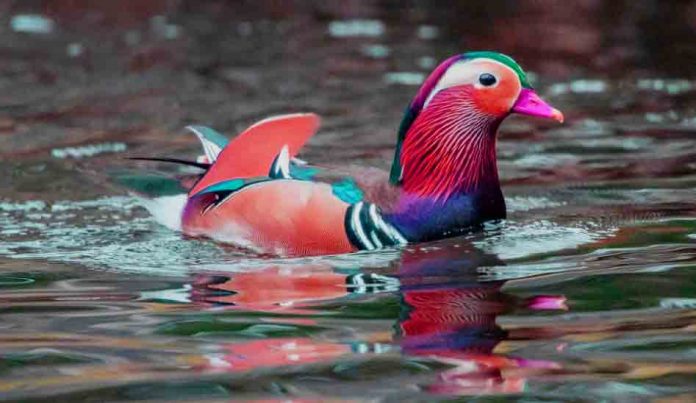 This duck stands Early on a cool recent morning,

dozens of ducks milled about the pond at Irvine Regional Park in Orange. Most were mallards or wood ducks, there were a few coots and a variety of others. Bobbing in the middle of this collection of familiar waterfowl was a single duck that stood out from all the rest with its boldly colored feathers – a mandarin duck.

If the glamorous-looking mandarin duck were a person and walked into a crowded room, all conversations would stop and heads would turn. It has been called by many the world’s most beautiful duck, and it certainly looks that way when floating on a local pond with other ducks.

Mandarin ducks have been spotted over the years throughout Orange County: in Huntington Beach, Costa Mesa, Anaheim and Orange. The small duck is native to East Asia.

In recent years the mandarin duck has started appearing far from its native territory, including New York’s Central Park and much of Western Europe.

“There are people who have kept collections of waterfowl.  The birds are descendants of birds that escaped or were released,” said Sylvia Gallagher, an Orange County bird identification instructor and expert.

“They obviously feel at home and are becoming established,” she said, though added, “I don’t think the American Ornithological Society recognizes them as ‘established’ yet.”

CDC testing requirements for UK travelers are like ‘a chain link...

Diminished Hearing, Vision Together Could Be Risk Factor for Dementia

Northern Lights Could Be Visible in New England This Week